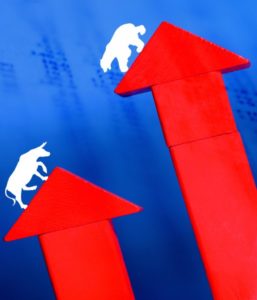 Sound crazy? Let’s see.  When Lehman Brothers went under in September 2008, it triggered a meltdown in the investment markets.  Many investors sold some or all of their investments by the time the stock market hit bottom on March 9, 2009.  The indices fell, crept up a bit, and then fell even further again several times until hitting bottom.  What a nail biter.

Would it have been better to “do nothing” – that is, stay the course and remain in the market during market upheaval?

Let’s compare two strategies in the worst time of the Great Recession: Let’s look at a comparison of stock returns on a $1 million investment in the S & P 500 Index for two different strategies from the period of July 15. 2008 to December 15, 2009, 18 months:

Another example of the benefits of staying the course in volatile markets is noted in an article written by Larry Swedroe, Director of Research for the BAM Alliance published October 18, 2017 for ETF.COM, Better To Face Correction.  Mr. Swedroe makes a compelling case for staying invested during times of great volatility.  From 1927 to 2016, the average monthly return for the S & P 500 Index was 0.95% which is close to 12% per year.

As he points out, many investors don’t know that most stock returns come in very short and unpredictable bursts.

Even though it is stressful and unnerving when stocks appear to be in a free fall as happened most recently in the fourth quarter of 2018, it is best to have a well thought-out, flexible, globally diversified plan that stands the test of time.  Investment plans based on academic research are better equipped to ride out the market downturns and achieve optimal returns in rising stock markets.

During the Great Recession investors who held well-balanced stock and safe, fixed income investments did much better than most and protected their wealth during that time.

How? The investments that increased in value in the depth of the great recession were the safe, fixed income investments; these investments such as treasury bonds and bank CD’S achieved significant growth during that time.

Wise investors sold these investments in the Great Recession as interest rates dropped and bought stocks to rebalance their portfolio.  It was the classic buy low and sell high strategy during the extremely volatile, distressful stock market.

As Mr. Swedroe mentioned, the only time a well-designed investment portfolio should make major changes are when either the manager of the investment fund in your portfolio is not following their fund’s objectives or when it is time to rebalance your portfolio to keep you on track with your long-term investment goals.

In addition, long-term, well thought out portfolios minimize annual tax on capital gains, by selling and re-balancing the portfolio when needed to stay on track with your long-term plan and taking strategic tax harvesting when appropriate.

We welcome your comments on this topic and are pleased to offer a complimentary meeting to discuss your questions on these important wealth management and tax planning issues.

While every effort has been made to provide valuable, useful information in this publication, this firm and any related suppliers or associated companies accept no responsibility or any form of liability from reliance upon or use of its contents. Any suggestions should be considered carefully within your own particular circumstances, as they are intended as general educational information only

In these inflationary times, it is important to hold investments that can protect your portfolio.  With sustained inflation the…

Income tax benefits in a downturn.

Downturns are distressing for investors in part because of the unpredictability of the market. There are,…

Read More
Back to the top